Bitten by the bug: New tech-driven cricket farm for WNC

Bitwater Farms isn't much to look at. If it weren't for the cricket mural on one shipping container, retrofitted as a workshop, there's little to indicate that what's being built and raised on this rural piece of property in Mills River holds such potential for change in agriculture.

So far Bitwater Farms has largely been operating quietly, save for the undeniable chirp of crickets. And then there's that smell.

The high-protein insects are a relatively untapped nutritional powerhouse in this corner of the planet.

Bitwater's cricket habitats range in size from smaller than a tool shed to a grand, patent-pending masterpiece appropriate for larger-scale farms. The latter will be the biggest moneymaker for this data-driven farm and could revolutionize sustainable farming, bringing tens of millions to the area over the next decade.

Besides the technical know-how of the self-proclaimed data geeks who mainly run the show at Bitwater, it's all being fueled by spent brewers' grain, an abundant resource in Western North Carolina with its more than 60 breweries.

That's why, mingling with the smell of corn nuts in the 10,000-square-foot-Mills River warehouse, is something a bit maltier.

It doesn't smell like this in all cricket farms — and there are hundreds of them throughout the country. "If the populations aren't healthy, the smell will make you sick to your stomach," McDonald said.

But these crickets are a different story.

Instead, these bugs are kept clean, hydrated and well-fed on leftover grain from local breweries. That's because long-term plans have about 80 percent of the crickets going to premium livestock feed, with 20 percent going to people like Jesse Roque, the Hendersonville-based chef and owner of Never Blue.

There's a cricket taco on Never Blue's menu, and Roque said she'd jump at the chance to get locally sourced bugs. Now she pays a premium price for a Canadian product.

"It would make my life so much easier and I could tout the fact that I have a local product," she said.

Customers thought Roque was crazy to put an insect dish on her menu when it appeared this spring. "But this is next big thing," she said. "Pretty soon there won’t be enough land to graze livestock, so people need to get over their bug phobia."

Once dehydrated, crickets can yield up to 60 percent protein using very little resources and grow to harvestable age in six weeks. By contrast, beef cattle typically go to slaughter at 18-22 months.

They also have an abundance of lipids and fats, and extremely high concentrations of iron and methionine, an amino acid important in feed for healthy chickens. And crickets have the power to hold incredible stores of micronutrients in reserve using minuscule amounts of food and water.

"They're sort of extraordinary in their ability to do what is known as bio-accumulation," McDonald said. "Insects are dramatically more efficient than mammals."

Not only are they excellent for animal food — anyone with a passing understanding of the difference between an egg from a grain-raised bird and the orange-yolked version from a free-range bird can tell you that — they're also reportedly good for the environment.

According to the pro-insect eating Food and Agriculture Organization 2013 report, "Edible Insects: Future Prospects for Food and Feed Security," insect protein is recommended as one of the most sustainable forms of animal protein available.

Insects make up part of the dietary habits of an estimated 2 billion people globally, and experts say hopping on that bandwagon may help save the world.

"There isn't anything I can do to save the world because I don't think the world needs saving," McDonald said. "But I do think that, of all the things I've done, this is by far the best opportunity I've ever had to shape the world in the way that I want to shape it."

McDonald, who graduated from UNC Asheville in 2004, and has mostly worked in tech startups and venture capital efforts, said he and his team performed an exhaustive data-driven search of nearly 20 sites for a Bitwater Farms relocation, measuring each against dozens of objective and subjective variables.

"What we found out was that Western North Carolina had some unique advantages, including a cultural appreciation of sustainable agriculture, and then certainly all the spent brewers grain that your heart could possibly desire," McDonald said. 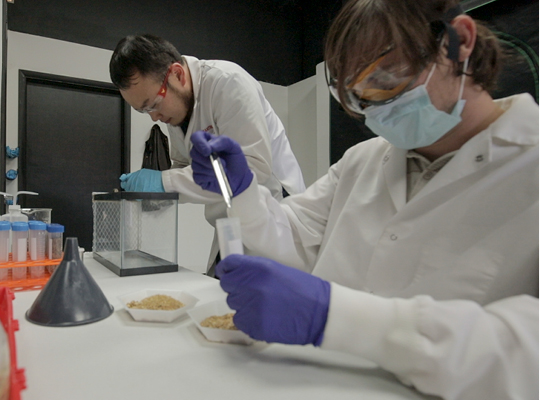 McDonald and his team use the Mills River property mainly for research and development. Ten years from now, they expect there will be thousands of farms around the world producing large volumes of insects for various purposes.

"And there's got to be a John Deere of that industry that provides all the equipment and technology for farmers to do that," McDonald said.

In the process, they also grow their own crickets for food as well as research.

"It would be silly to design large-scale production equipment and not use it," McDonald said. "John Deere doesn't design a tractor and drive it around a warehouse and then send it to a farm. We have to actually test this stuff."

The human food-grade crickets get the highest quality feed and substrate, and the highest measure of bio-security. Those crickets are processed at Blue Ridge Food Ventures, where they're washed several times, steam-treated, frozen and stored in Bitwater Farms-labeled vacuum-sealed packages.

Some are transported around the country. Food-grade crickets will also find their way into collaborations with local beverage and food-producing businesses, the identities of which McDonald couldn't yet reveal.

There's always a market for the food-grade product at Asian markets, and crickets are also big in Oaxacan dishes.

For a food-production setup, this one turns out very little waste. The cricket frass, another name for manure and exoskeletons, goes to local farmers for fertilizer. And crickets that end up being exposed to non-sterile conditions, spilling out of a shipping box, for example, are scooped up and given away as bait.

Its socially responsible ethos has earned Bitwater Farms the attention of some universities. The farm will announce partnerships for feed trials in the coming months.

"You're not going to find another cricket producer around for miles that I'm aware of," he said. "That's how unique it is. But it all makes great sense when you look at the availability and the influence of spent grains."

But the fact that North Carolina is so big in poultry production makes it an even better fit. Poultry, the No. 1 agricultural industry in the state, makes up nearly half of North Carolina's total farm income. 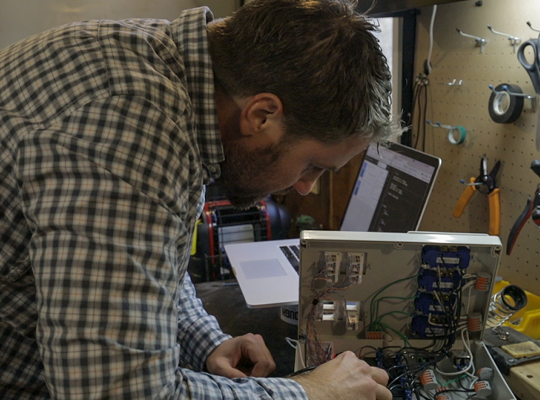 "Bitwater Farms brings innovative technology to a place where they should be able to thrive and be a great corporate partner," Williams said. "North Carolina is huge in poultry production, and this provides an opportunity for local food for local livestock, adding completion to the idea of locally grown."

According to Williams, Bitwater Farms did not pursue any cash or tax incentives to come to the area.

"He indicated the company was focused on investing in the community rather than taking from it," Williams said in a followup email. "That was a bit (no pun intended) unusual, but refreshing."

For his part, Williams said he hadn't yet tried to eat a cricket. "But I wouldn't be afraid to," he noted.

"I don't think anyone disputes that if you put a chicken in a field full of soybeans, it's going to run around eating bugs," McDonald said. "Birds have been eating bugs for as long as birds and bugs have been around."

"When you watch a chicken go after a cricket in a pasture, it seems like the chicken is pretty happy," said the farmer, who added that he's excited about Bitwater Farms' products.

"We need more sources of livestock protein available, and I think cricket meal is certainly within the realistic alternatives," he said.

Human-grade crickets can sell for up to $15 per half-pound pouch; feed crickets can fetch about $1-2 per pound.

The next size up, the M2, can produce 500 pounds per cycle. But it's the M3s that can make the most impact. They're enormous cricket habitats, and can produce anywhere from a half-ton to ton per harvest.

"They might need 20 of those units and we would either build a warehouse or take an existing warehouse and retrofit it and train one or two people on how to process and handle it," McDonald said.

Why bother? "A similar sort of scenario is why would you buy solar panels?" McDonald said.

Some want a more sustainable form of production, while others want to produce their own power and reduce cost volatility by changing it from an operating expense to a capital expense, he said.

"Fundamentally, they want to control their own destiny. We offer the same value to farmers."

"That is typically not the way that goes," McDonald said.

McDonald and his crew will on Monday demonstrate Bitwater's farm solutions on the White House lawn at South By South Lawn, a tech-based event produced by South By Southwest. Learn more about Bitwater at www.bitwaterfarms.com.